What Will Happen In Chilling Adventures of Sabrina Season 2?

Something wicked this way has come, and we’re already clamoring for more.

Chilling Adventures of Sabrina made its debut on Friday, and now all we can do is ask what happens next? Luckily, we could actually ask the cast and creator of the show that question and they had plenty of answers since filming for season two is already well underway. But first, let’s discuss what happened in that major season one finale.

While Sabrina (Kiernan Shipka) was still reeling from having failed at resurrecting Harvey’s (Ross Lynch) brother—and Harvey was still reeling from having to kill his zombie brother—Madam Satan (Michelle Gomez) was hard at work on her grand plan to get Sabrina to sign the Dark Lord’s book and become a full member of the coven. She eventually managed this by bringing back the original 13 Greendale witches who were hanged and buried on Susie’s (Lachlan Watson) family’s land, and who are now very angry.

The witches brought with them a guy on a horse who would murder every first born child in the town, and in order to save the town, Sabrina would have to sign the book to gain the power she needed to take the witches down. Or at least that’s what Madam Satan told her, and it worked. Sabrina signed the book, saved the town, and when we last saw her, her hair had gone platinum and she was pinky in pinky with the Weird Sisters, waltzing down the halls of the Academy of the Unseen Arts.

Meanwhile Harvey, Roz (Jaz Sinclair), and Susie all know Sabrina’s a witch, and Zelda (Miranda Otto) stole the unexpected female twin that Lady Blackwood gave birth to before she died, to save her from Father Blackwood (Richard Coyle) and his patriarchal ways, and Hilda (Lucy Davis) might have found herself in a romance with Dr. Cerberus.

So basically, the entire dynamic of the show has changed completely, and season two very well could be an entirely new world of Chilling Adventures of Sabrina. We’ve got scoop on all this and more, if you’ll just scroll down a bit… 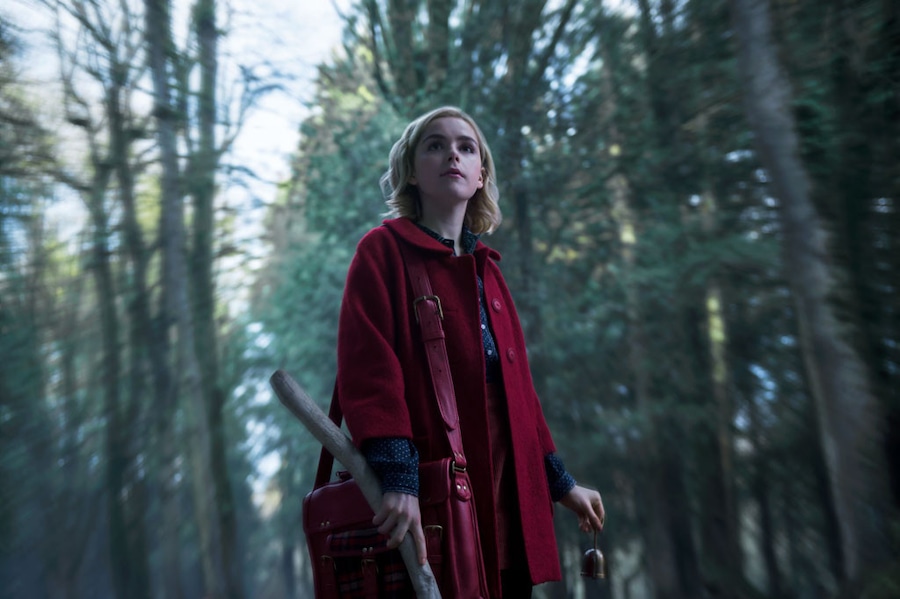 “A lot of season one was Sabrina trying to stay in the mortal world, even as she kind of got deeper, further along the path [of Night]. She was always trying to keep one foot in the mortal world and that was sort of where her center of gravity was,” creator Roberto Aguirre-Sacasa tells E! News. “At the end of season one, what the ending seems to promise is that her base of operations has shifted. It’s now not that she goes to Baxter High and after school goes to the Academy, it’s now she goes to the Academy, and will she have any time [for the mortal world], and how much or how little will she relate to her previous mortal life is, I think, the question that we end on.” 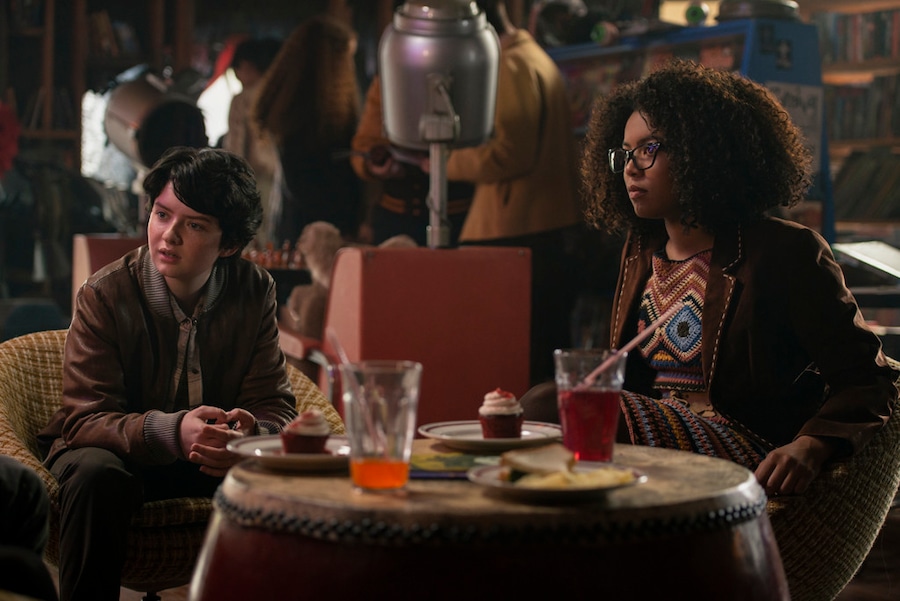 But the Mortals Aren’t Going Anywhere

Roz, Susie, and Harvey all learned of Sabrina’s true nature pretty quickly into the series, which was a simple way of keeping them involved.

“Sabrina would always have these great witch adventures like the witch exorcism, going into limbo and stuff, but she could never do that with her mortal friends,” Aguirre-Sacasa explains. “People need to be able to talk to other people about stuff, and now Sabrina had Ambrose and her family, but the mortals provide a very different point of view.”

Jaz Sinclair and Lachlan Watson both promise that now that the mortals are involved in the witch world, s–t’s gonna get weird(er).

“I think adding some witchery to the mortal world can do nothing but make it go straight out into crazytown,” Watson teases. “Things get a little out of control but I think it’s very exciting while it happens.”

Sinclair says she’s excited for the “worlds melding together,” which is what gets to happen now that the friends are in the know. 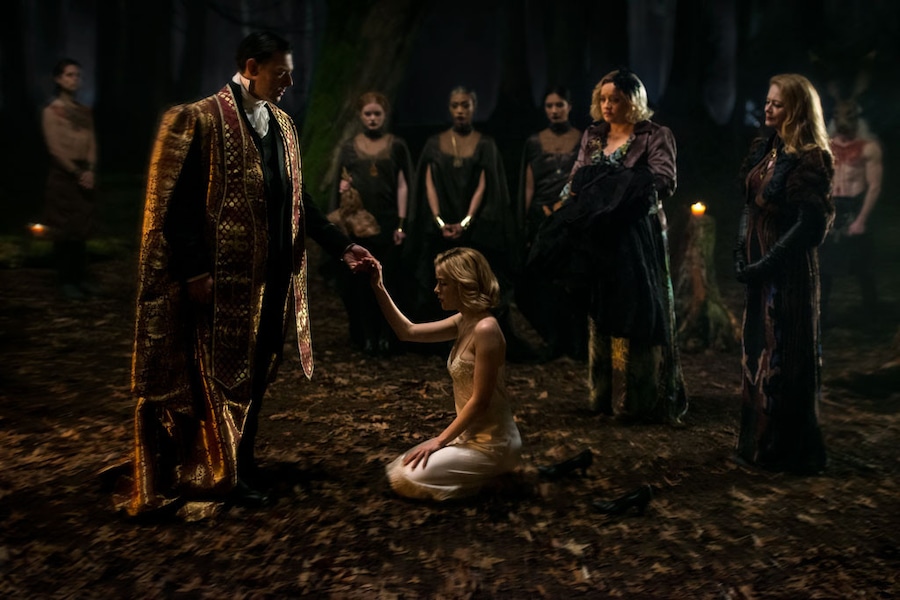 Shipka does not see Sabrina signing the book as her giving in to what the Dark Lord wants, but more as another way to fight against him.

“She did it to find her own power to defeat the Dark Lord,” she told us at the show’s premiere. “She didn’t do it to succumb. She did it because she felt it was the necessary step to takin’ on the patriarchy, basically, which is what the Dark Lord, in so many ways, embodies.”

“Now Sabrina made the choice, it’s worth saving the town in the present for a problem that is in the future, maybe far in the future or near in the future,” Aguirre-Sacasa teases. “But the tension of Sabrina having signed her name in the book or what that means is absolutely the dramatic question and the motor in season two.” 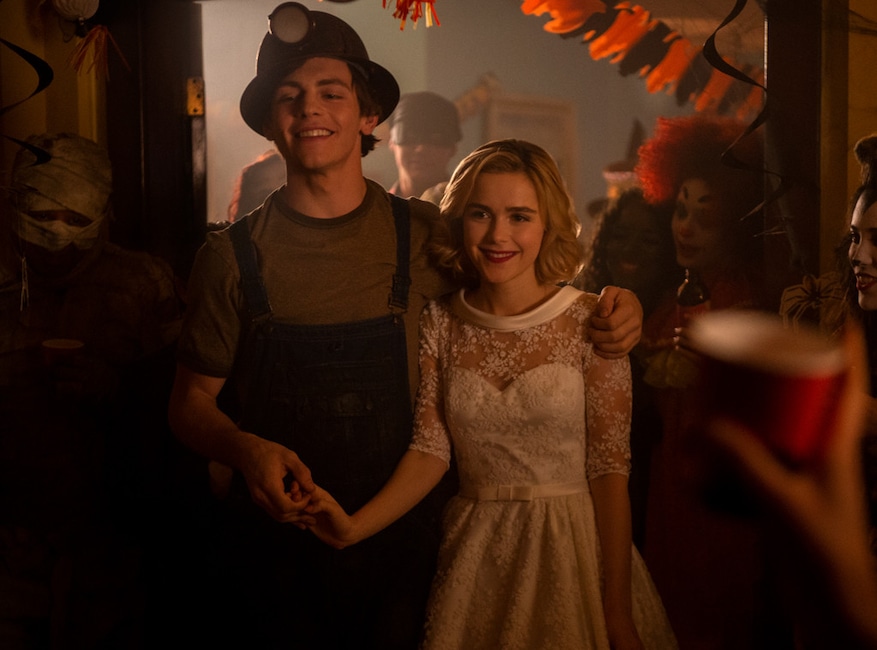 Sabrina and Harvey Are TBD

While Aguirre-Sacasa, Shipka, and Lynch all ship the iconic couple, it may be hard to recover from what they just went through, with Harvey having to kill his own zombie brother and all.

“I will say genuinely, in Sabrina, I am really torn because I love Sabrina and Harvey together but I’m really intrigued by Nick and Sabrina being together,” Aguirre-Sacasa says. “I really like that they’re so different. I hope that Harvey and Sabrina have a chance. I mean they’re definitely end game in the comics. Yeah, their story is not quite done, I wouldn’t say.”

While Sabrina in the ’90s show dated quite a few guys after Harvey and before getting back together with Harvey, this Sabrina is not “a party animal,” as Aguirre-Sacasa says, though “that may change in season two.”

“Dating is a fun adventure,” he adds, so perhaps Sabrina might be playing the field a bit coming up. 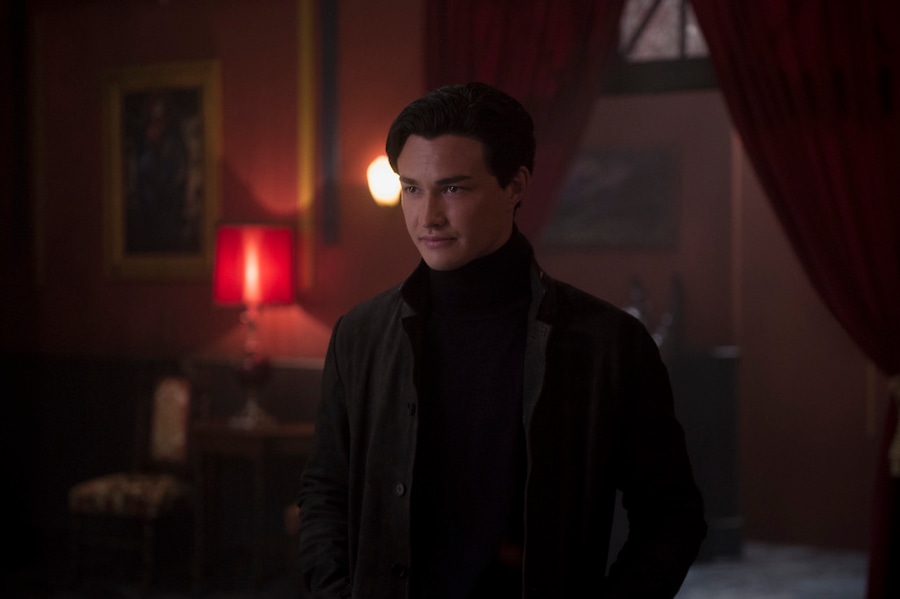 Sabrina and Nick Are Also TBD

With Sabrina and Harvey taking a break, there could be room for Nick and Sabrina to give things a try. He’s certainly more intrigued by her than he originally thought he’d be, and we saw a sort of look in his eyes at the end of the season.

“There’s a lot happening,” Gavin Leatherwood says of what Nick was thinking during that final scene. “It felt like a double take, like oh there’s the Weird Sisters, and there’s Sabrina, and then oh wait, that’s Sabrina with the Weird Sisters. He’s kind of caught off guard by her… It’s as if he’s seeing her as a woman, and no longer this girl.”

Leatherwood says that Nick is “absolutely excited” about Sabrina embracing her witch-hood, but he’s a little worried about the company she’s keeping, “because he knows them.”

As for whether they have a future together, Leatherwood wouldn’t give that away, but he did tell us that there’s “growth” that will happen between them, especially since he knows all about the magical world that Sabrina has just officially joined. 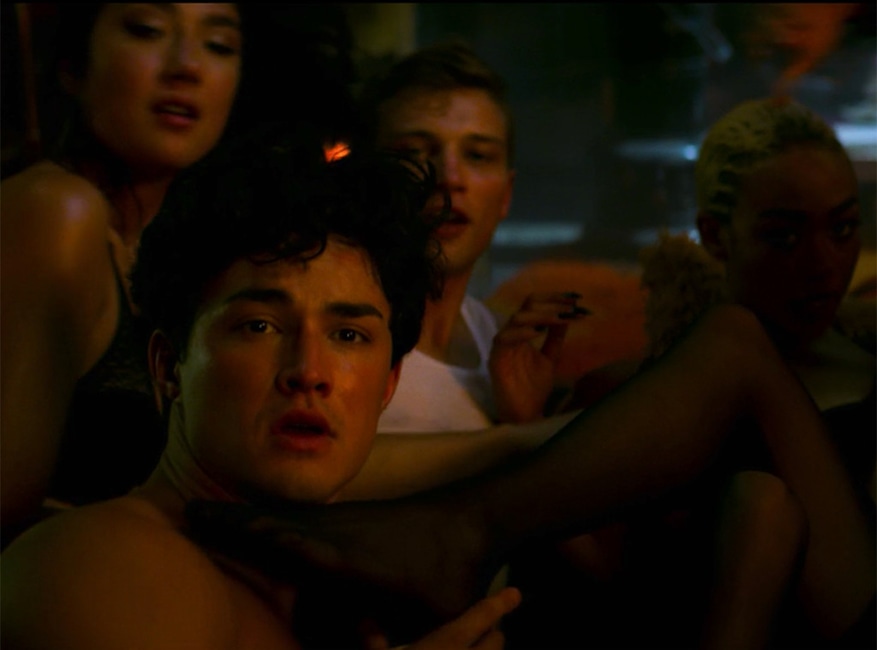 “In season one, as adorable as they are, there’s a real refreshing innocence to Harvey and Sabrina. I think in season two, when Sabrina’s spending a lot more time with the witch academy, we do start learning that witches have a very different point of view about sexuality and monogamy and being polyamorous and not being defined by labels,” he says. “That’s not just going to be backdrop. That’s going to be story that we tell.” 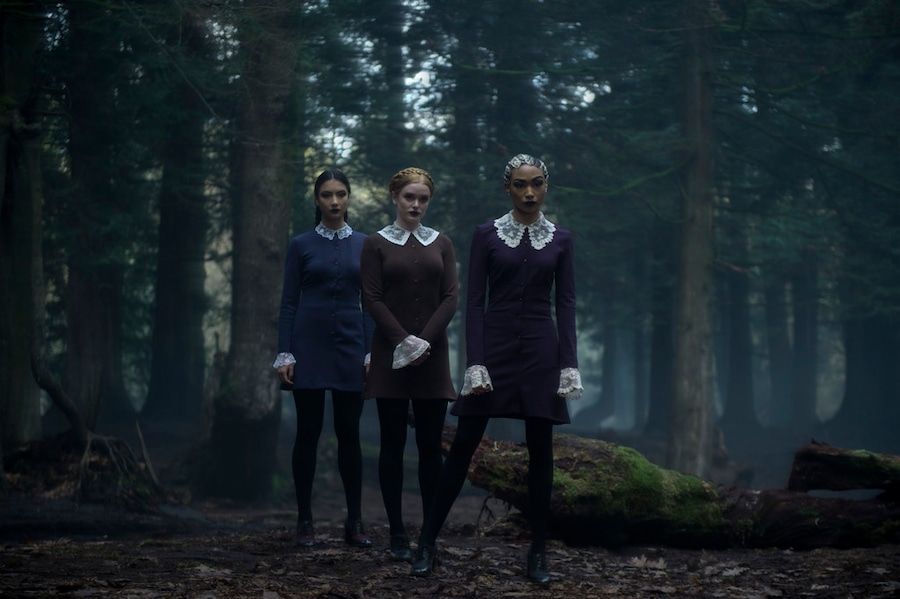 When last we saw Sabrina, she looked like she was a full blown member of the Weird Sisters, and while that scene was pretty grand and theatrical, that relationship is not as solid as it may have looked.

“I don’t think they’re going to be besties, but they do hang out more, and Sabrina’s going to find herself drawn tot his darker side, which Nicholas and the Weird Sisters represent,” says Aguirre Sacasa. “But is it going to be like they’re besties? No, they’re still probably going to be frenemies.”

The Weird Sisters themselves agree.

“We have, I think, a love/hate relationship with Sabrina,” Tati Gabrielle tells us. “We’re frenemies, we’re foils, and as Sabrina grows, we grow with her.”

“Our relationship goes up and down,” says Adeline Rudolph, and Abigail Cowen teases that “for now, they’re on each other’s good side.”

Madam Satan might have gotten Sabrina to sign the book, but “she’s got more work than she reckoned” when it comes to the newly platinum witch, says Michelle Gomez.

“I think she thought that was going to be tying up some loose ends…but no, it’s gonna get pretty gnarly.” 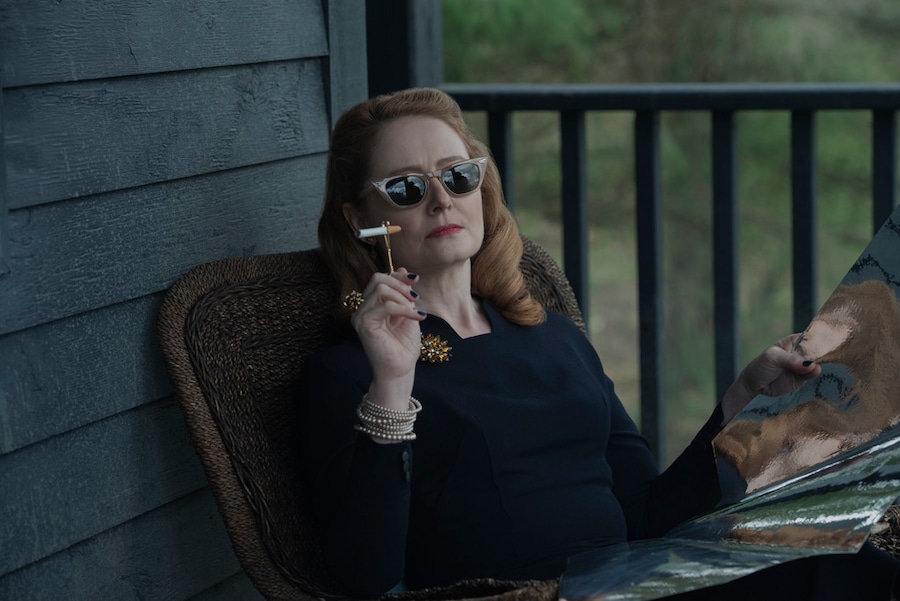 Miranda Otto says she was surprised by Zelda’s decision at the very end of the season to steal one of Father Blackwood’s twins, protecting the unexpected baby girl from whatever fate might have befallen her in this extremely patriarchal society.

“I think she surprises herself when she does it, really,” Otto tells us, calling the baby-snatching a “mercy mission” that was a little bit inspired by her rebellious niece.

As for Hilda’s response, Lucy Davis says she’s “weirdly less excited than you might think.”

‘Hilda’s such a motherly figure, you might think ooh, a little baby. But I think she has just started to break free of Zelda’s apron strings or chains and started to having a life of her own, and I think possibly she thinks oh, the next 18 years, Zelda bringing home the child and Hilda having to look after the child. So I don’t think she’s as excited as you might think.” 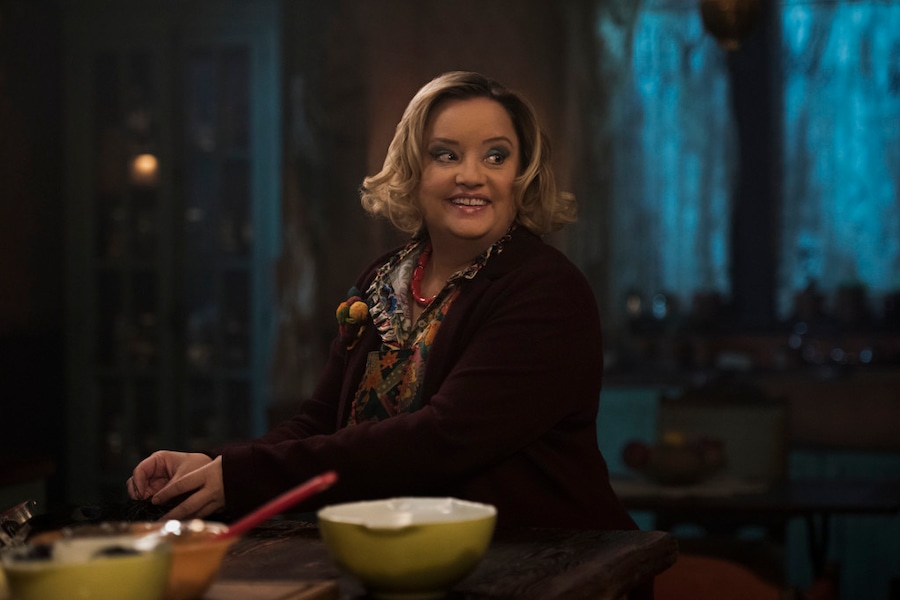 Hilda Just Wants to Be Loved

“The idea of Hilda trying to flirt…it can’t go well,” Lucy Davis tells us of Hilda’s attempts to be romanced, currently by her boss, Dr. Cerberus. “She wants so much to have the love story, and given that witches and warlocks are pansexual and they are open to any and everything, Hilda is still locked in her little romance novels…” 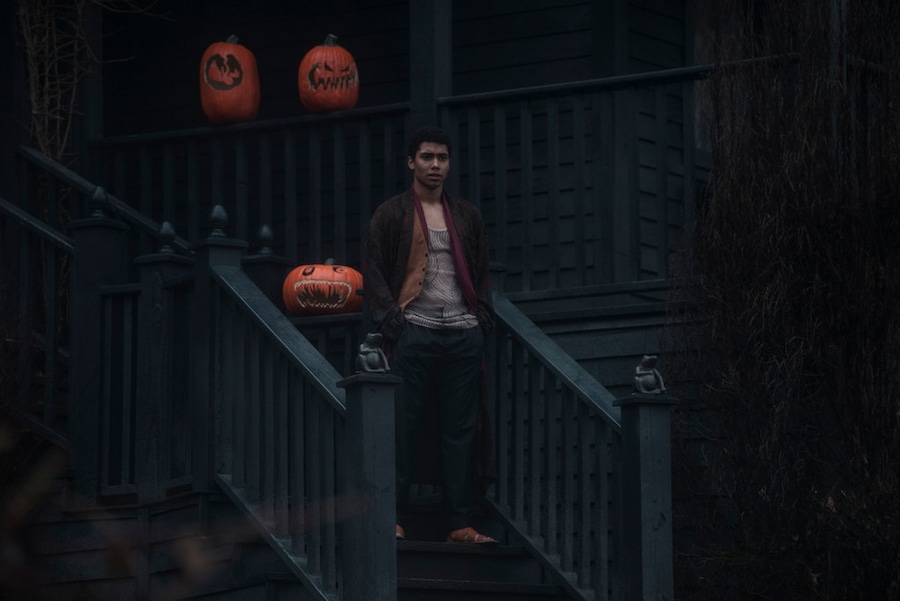 “You see Ambrose’s past come back to haunt him,” Chance Perdomo teased of his journey in season two. “I can’t tell you how, but I can tell you it’s about him deciding what kind of person he wants to be coming into this world he’s in.”

When last we saw Ambrose, he was in the midst of both falling in love and getting his house arrest sentence reduced by Father Blackwood, so perhaps we might see him get to enjoy even more of the world outside the Spellman house in season two. 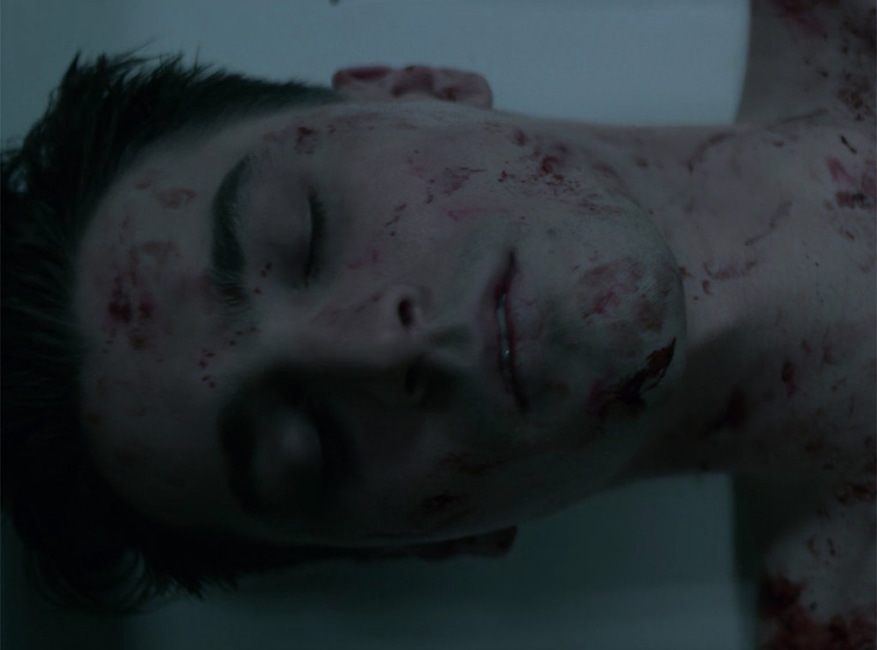 Despite the fact that we ended the season with no answers about the murdered warlock (or his poor iguana), Aguirre-Sacasa says the show has not forgotten about him.

“We have not finished that story,” he says, but don’t expect a full on murder mystery, a la Riverdale season one. “It’s not quite like ‘who killed Jason Blossom,’ but it is a mystery that twists and turns a little bit, yes.”

Chilling Adventures of Sabrina is currently streaming on Netflix.

Parents, be the change you want to see and vote for your SGB

Roger Federer confirms via Twitter that he WILL play French Open

Crypto and blockchain: it’s time to put the phenomenon vs fad debate to bed